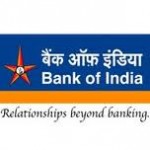 Bank of India written test conducted on October 31 & November 21, 2010.Over 5800 candidates were shortlisted in this exam for whom the interviews were held during March – April 2011.

Sorry, the comment form is closed at this time.